Posted by anthony in Energy 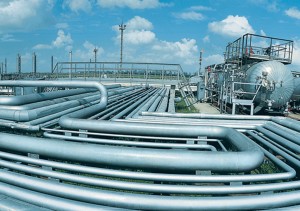 Europe uses a lot of crude oil and natural gas (to the tune of billions of cubic feet per year). The difference is crude oil is easily transported by ships from all over the world, while natural gas is mostly delivered by pipelines.

As a whole though, the European Union uses the second most natural gas in the world, ranking well behind the United States, the largest user on Earth, and just ahead of Russia. Within Europe, the largest consumer of natural gas is the United Kingdom, followed close behind by Germany and Italy. Those are the only two countries in the top 10 of natural gas consumption worldwide as well.

Where does it come from?

The natural gas comes from 13 pipelines that come from Russia. In terms of who imports the most, that would be Germany and Italy, who together account for half of the EU gas imports from Russia. Other major imports of Russia natural gas to the tune of over five billion cubic meters per year, are France, Hungary, Czech Republic, Poland, Austria and Slovakia.

In terms of how it breaks down, the following countries get 100 per cent of their natural gas from Russia:

The following countries get over 75 per cent of their natural gas from Russia:

The following countries get over 30 per cent of their gas from Russia:

The following countries get less than 30 per cent of their gas from Russia:

How does Ukraine impact this?

The Ukraine crisis has remodeled the European natural gas equilibrium. While many are looking to the European Union to get its natural gas from elsewhere than Russia, it is important to point out that most European country customers have long-term legal contracts for gas delivery from Russia, regardless of disputes, that go beyond 2025 to 2030. Nonetheless, there is a call to diversify the energy market of Europe to combat Russian dominance of natural gas in Europe.

There are talks of other countries providing natural gas, with Canada being one of the leading contenders. Canada has some of the largest natural gas stores in the world, and even Chancellor Angela Merkel of Germany stated her excitement to get natural gas from Europe, since her country currently gets most of its natural gas from the UK, Norway and Russia.

Of course, it is unlikely to happen anytime soon. Canada would need to update and enlarge its natural gas port facilities on its east coast, and Europe is unlikely to sign 30 to 40 year contracts with Canada for natural gas at this time.

If Russia were to halt its gas supply in the summer, this would cause a doubling of the prices in the United Kingdom.

While there is the worry about natural gas stoppage from Russia, it is unlikely the country would go to that drastic action considering how much money it gets from the European Union for natural gas. More likely, is that Europe will continue to use Russian natural gas since it is much easier to get than gas from elsewhere.